Lucie Pohl is a German-American actress and stand-up comedian. Pohl is the daughter of theater director and singer Sanda Weigl and the actor and dramatist Klaus Pohl. She is sister of writer Marie Pohl and cousin of actress Anna Thalbach. Pohl is the voice actor for the heroine Mercy in the video game Overwatch. She featured in the Red Dwarf episode "Twentica" as Harmony de Gauthier.

• Theo Rossi (John Theodore "Theo" Rossi is an American actor, best known for his role on the FX series Sons of...)

• Michael Moloney (Michael C. Moloney is a decorator and television personality who makes regular appearances on the...)

• Star Wars Kid (Star Wars Kid is a viral video made in 2002 by Ghyslain Raza in which he wields a golf ball retri...) 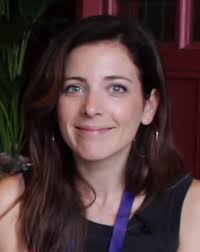 About the Lucie Pohl Interview

I'm a German-Jew who comes from a wild family of eccentric, drama addicted artists including Bertolt Brecht and countless other crazy characters and I tell people all about what it's like growing up in the Pohl Circus, being an immigrant and the search for home in my solo comedy show “Hi, Hitler” at The Cherry Lane Theatre in New York July 11-30. I am also the voice of Mercy on a little game you may have heard of called Overwatch. Ask me anything!
THAT'S IT FOR ME GUYS! THANKS SO MUCH! I HAD A BLAST AND LOVE YOU ALL! HOPE TO SEE YOU AT MY SHOW IN NYC AND AT CONS IN YOUR CITY! YOU GUYS ROCK!!!