Daniel Mark "Dan" Hardy is an English former mixed martial artist who fought in the welterweight division. During his professional MMA career starting in 2004, Hardy fought in various promotions such as Cage Force and Cage Warriors before signing a contract with the Ultimate Fighting Championship in 2008.

• Carol Queen (Carol Queen is an American author, editor, sociologist and sexologist active in the sex-positive ...) 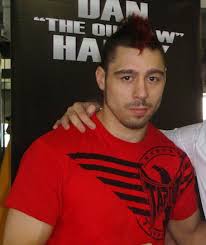 About the Dan Hardy Interview

I've done this once before and had a lot of fun, and a lot has happened since then. I'm now a UFC commentator and analyst, I've moved back to the UK and am helping promote the sport in Europe, and I have my first book coming out!

'Part Reptile' will be released on March 23rd, and is available for pre-order now. It's autobiographical and follows my career in mixed martial arts from my very first Taekwondo class at six years old, to where I am right now.

I'm happy to answer any questions on any subject, from the McGregor / Mayweather drama to the psychedelic experience, and beyond!

I am looking forward to hearing from you all.
http://imgur.com/a/KoIp9