Jeff Rosenstock is an American musician and songwriter from Long Island. He was the lead singer of the ska-punk band The Arrogant Sons of Bitches, the musical collective Bomb the Music Industry! and the indie rock band Kudrow.

• Nick Valensi (Nicholas "Nick" Valensi is an American musician, and a founding member of the American rock band ...)

• Dan Ariely (Dan Ariely is the James B. Duke Professor of Psychology and Behavioral Economics. He teaches at D...) 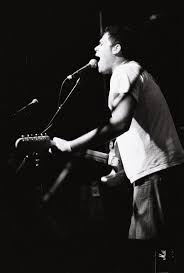 About the Jeff Rosenstock Interview

Hallo. My name is Jeff Rosenstock. I make music with my friends and put out a record in October called WORRY. I play/have played in a bunch of bands (Antarctigo Vespucci, Bomb the Music Industry!, The Arrogant Sons of Bitches, Kudrow, blah blah blah) and I've produced a bunch of records (The Smith Street Band, Laura Stevenson, Dan Andriano, Mikey Erg, blah blah blah). In 2006, I started Quote Unquote Records, a donation-based digital record label. I'm about to go on tour in the United States with The Menzingers and Rozwell Kid. I also have particularly low-light vision and particularly bad dental hygiene.