Adam Charles Goldberg is an American actor, director, producer, and musician. Known for his supporting roles in film and television, Goldberg has appeared in films such as Dazed and Confused, Saving Private Ryan, A Beautiful Mind and Zodiac. 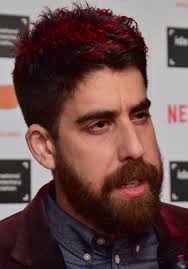 About the Adam Goldberg Interview

Jerk of all trades, actor fro 27 years, filmmaker, photo and music maker. Currently can be seen in Netflix's "Rebirth" and on TV Land's "The Jim Gaffigan" show. Beginning to mix the 4th The Goldberg Sisters record, which will be limited edition vinyl with 12 of my photography prints, one for each song. Exhibition to follow. I'm also constipated.

HEY LADS AND LAYETTES I'M SO SORRY, BUT I HAVE TO RUN. I'D REALLY LOVE TO COME BACK AND TALK SOME MORE. SO EITHER HERE DURING SOME INSOMNIAC JAG OR AT A DATE IN THE NOT TOO DISTANCE FUTURE. THANK YOU FOR YOUR THOUGHTFUL QUESTIONS AND FEEDBACK. ALL THE BEST! ag