Evan Lionel Richard Osnos is an American journalist and author. He has been a staff writer at The New Yorker since 2008, best known for his coverage of China. 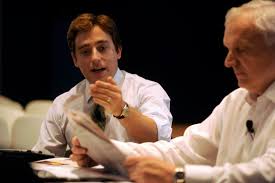 About the Evan Osnos Interview

I cover politics and foreign affairs for The New Yorker. I most recently wrote about gun control: http://bit.ly/28SBIFN
For more background on how the gun industry exploits fear, here's a quick video: http://bit.ly/28OiKwO I’ll be taking your questions at 3:00 P.M. EST. Ask me anything.
Proof link: https://twitter.com/eosnos/status/745969099981881344

Thanks everyone for terrific questions. See you at newyorker.com and elsewhere. Signing off.