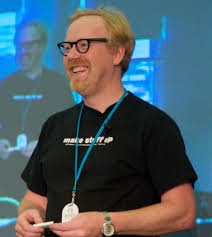 About the Adam Savage Interview

Last July I was here soliciting suggestions from you guys that we made into a really fun reddit special that aired last weekend (in the United States, anyway). THANK you. You guys came up with some great, TESTABLE ideas, and I think we made a really fun episode.

So in thanks I'm here to answer your questions about that or whatever else you're curious about, now that you're aware that MythBusters is ending. In fact, our finale is in two days! (Yes, I'm sad.) But anyway, I'm yours. Ask me anything.

EDIT: Okay kidlets. I've been at this for awhile now and I think it's time to pack it in. Thanks for all the awesome questions and comments and I'm glad and grateful and humbled to the comments about what MythBusters has meant to you. I'm fundamentally changed by making that show and I'm glad it's had some positive effect. My best to everyone and I'll see you lurking around here somewhere...