Stephen Wolfram is a computer scientist, entrepreneur and former physicist known for his contributions to theoretical physics; his pioneering work on knowledge-based programming; as the CEO of Wolfram Research and chief designer of Mathematica and the Wolfram Alpha answer engine; and as the author of the book A New Kind of Science.

• Jim Barker (Jim Barker is the general manager of the Toronto Argonauts of the Canadian Football League.)

• Mike Taylor (Michael Taylor is a former racing driver from Great Britain. He participated in 2 Formula One Wor...) 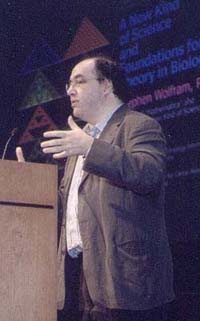 About the Stephen Wolfram Interview

Looking forward to being here at 4 pm ET today...

Some recent things to talk about:

OK. I'm done! That was fun! I thought I was going to spend 2 hours but you all kept me going with interesting questions for 6 hours! Now I'll have to look at my personal analytics and find how many characters I typed.

And don't forget to check out the free http://lab.open.wolframcloud.com and more from http://www.wolfram.com