Nicholas "Nick" Valensi is an American musician, and a founding member of the American rock band The Strokes, in which he primarily plays lead guitar and occasionally rhythm guitar. He also acts as lead vocalist and guitarist in his own band, CRX. 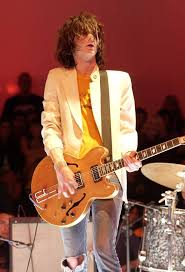 About the Nick Valensi Interview

Hello there. My name is nick valensi. You may know me as the guitarist for the strokes. I have a brand new band called CRX and we just released our debut album, New Skin. I think you'll enjoy it.
Here's a link for tour dates and tickets: http://www.crxmusic.com/tour/ Here is proof it’s me: https://twitter.com/crxmusic/status/784465379250823169 Here is photographic proof it’s me, Nick Valensi: https://www.instagram.com/p/BMR6nCQBwb9/?taken-by=crxmusic

UPDATE -- I GOTTA GO NOW. I HAVE CRX REHEARSAL IN 20 MINUTES. WE'RE GOING ON TOUR IN A WEEK. CHECK TOUR DATES ON OUR SITE AND COME TO A SHOW! THE REDDIT THING WAS FUN. THANKS FOR THE GREAT QUESTIONS, AND FOR BEING GENERALLY AWESOME. LET'S DO THIS AGAIN SOMETIME.