Scott Aukerman is an Emmy Award-winning American writer, actor, comedian, television personality, director, producer, and podcast host. In the mid-1990s, Aukerman was a writer and performer on Mr. Show with Bob and David. He currently hosts the weekly comedy podcast Comedy Bang Bang as well as the IFC original television series Comedy Bang! Bang!. Aukerman is also the co-creator of Between Two Ferns with Zach Galifianakis & co-founder of the Earwolf podcast network. 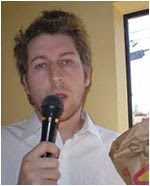 About the Scott Aukerman Interview

Thank you all - I have to go, but I appreciate all the fun and sincere questions. Please watch the show this Thursday? I'm very excited for you all to see it.