Brian Hugh Warner, better known by his stage name Marilyn Manson, is an American musician, songwriter, multi-instrumentalist, actor, painter, multimedia artist, and former music journalist known for his controversial stage personality and image as the eponymous lead singer of the band Marilyn Manson, which he co-founded with Daisy Berkowitz and of which he remains the only constant member. His stage name was formed by juxtaposing the names of two American cultural icons, namely actress Marilyn Monroe and Manson Family leader Charles Manson. He is perhaps best known for his songs and albums released in the 1990s, such as 1996's Antichrist Superstar and 1998's Mechanical Animals, which along with his public image earned him a reputation in the mainstream media as a controversial figure and a negative influence on young people. In the US alone, three of the band's albums have been awarded platinum and three more went gold, and the band has had seven releases debut in the top ten, including two number-one albums. Manson has been ranked number 44 in the Top 100 Heavy Metal Vocalists by Hit Parader, and has been nominated for four Grammy Awards. 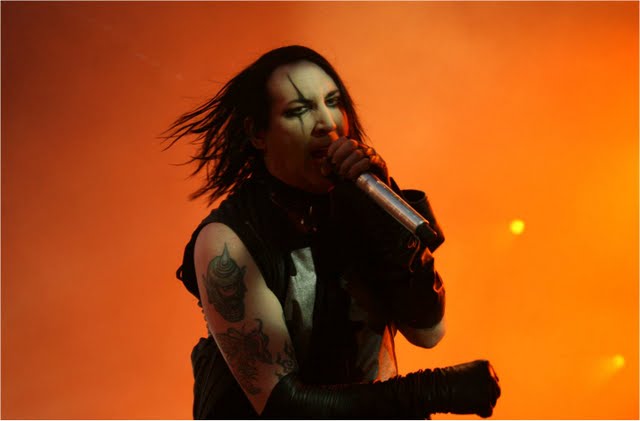 About the Marilyn Manson Interview

We're still gearing up for The End Times Tour, and I just got back from a bunch of European tour dates, the Cannes Lions where I spoke and I got a lifetime achievement award from Kerrang! magazine. And then we played Hellfest, the biggest festival in France.

Victoria's helping me out tonight. AMA.

Well, it's not that long before The End Times Tour starts in two weeks. And then we're going to do some even more shows on our own after that, because I'm enjoying seeing the fans and getting to meet them. We'll be doing a lot of meet n' greet situations. But I'd like to make those a little bit more along the lines of church tent revivals.

So everybody, be prepared for that. Some Deep South old time religion-style.

And I'll thank everybody with my performances, thanking them for coming.