Michael Cerveris is an American singer, guitarist and actor. He has performed in many stage musicals and plays, including several Stephen Sondheim musicals: Assassins, Sweeney Todd, Road Show, and Passion. He won the Tony Award as Best Featured Actor in a Musical for Assassins. He was called, by Playbill.com, "arguably the most versatile leading man on Broadway", playing roles from "Shakespeare's Romeo to The Who's Tommy, from the German transsexual rock diva Hedwig in Hedwig and the Angry Inch to the homicidal title character of Sondheim's Sweeney Todd." Cerveris' most visible television role to date has been as the Observer code-named September in the FOX science fiction television series Fringe. His character, a mysterious man seen attending many unusual events, has appeared regularly during the series and became one of the main characters to bring the story to its end.

• Anthony Rapp (Anthony Deane Rapp is an American stage and film actor and singer best known for originating the ...)

• Constantine Maroulis (Constantine James Maroulis is an American actor and rock singer from Wyckoff, New Jersey. He was ...) 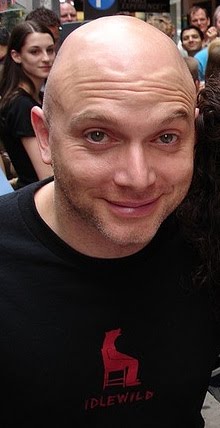 About the Michael Cerveris Interview

Well, I've been doing theater almost my whole life. I started really young in university productions at the college where my dad was teaching, starting with Brecht in second grade, and it was a long, strange trip from there to TOMMY, to HEDWIG, to John Wilkes Booth, to Sweeney Todd, with detours for Ian on FAME, and September on FRINGE, and Castro on THE GOOD WIFE... and now Bruce Bechdel in FUN HOME.

FUN HOME is playing now (http://funhomebroadway.com/) and is nominated for 12 Tony Awards, and I have a parallel life where I played guitar for Bob Mould of Hüsker Dü... Frank Black of the Pixies, Pete Townshend of The Who, and my own solo records and bands.

I'm here with Victoria from reddit in NYC. Let's take some questions.

Update: I'd just like to say thank you to everybody who wrote in, and apologize to those questions that we didn't get to. You can tweet @cerveris and Facebook me questions so that in my vast amounts of spare time, I will write you back. Meanwhile, I hope you will come see FUN HOME at Circle in the Square, maybe catch my band Loose Cattle roaming around town, and pick up our records at iTunes.

And hopefully - soon - I'll have news about my second solo record, called "Piety" that I recorded in New Orleans and I'm looking for a new home for, soon.