David Michael Hasselhoff, nicknamed "The Hoff", is an American actor, singer, producer, and businessman. He is best known for his lead roles as Michael Knight in the popular 1980s US series Knight Rider and as L.A. County Lifeguard Mitch Buchannon in the series Baywatch. Hasselhoff also produced Baywatch for a number of seasons in the 1990s up until 2001, when the series ended with Baywatch Hawaii. Hasselhoff also crossed over to a music career during the end of the 1980s and the early 1990s. He was noted for his performance at the Berlin Wall at New Year's Eve 1989; he enjoyed a short-lived success as a singer primarily in German-speaking Europe. More recently, Hasselhoff has been involved with talent shows. He was the first celebrity eliminated from the eleventh season of Dancing with the Stars on September 21, 2010. He was also a judge on NBC's America's Got Talent from 2006 to 2009. In 2011, he joined the Britain's Got Talent judging panel, alongside Simon Cowell, Amanda Holden and Michael McIntyre.

• Hugh Grant (Hugh John Mungo Grant is an English actor and film producer. He has received a Golden Globe, a BA...) 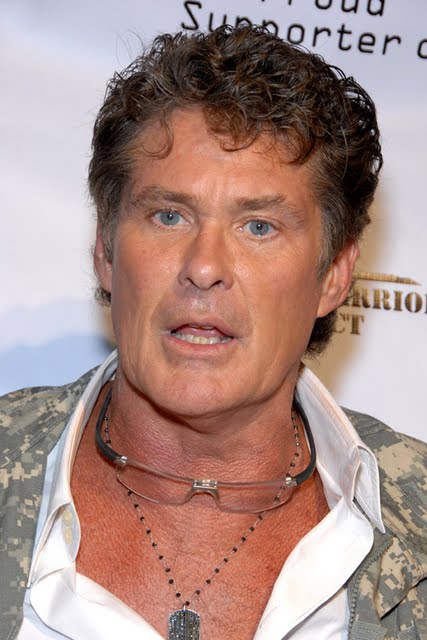 About the David Hasselhoff Interview

My latest single is "True Survivor," from the film KUNG FURY.

If you wanna Hassle the Hoff, the time is now.

Victoria's helping me on the phone.

Edit: Please stay tuned. The film KUNG FURY is released on May 28th for free on YouTube. And the best is yet to come from me and my family. I'm extremely proud of my daughters, Taylor-Ann Hasselhoff and Hayley Hasselhoff, who are both following their dreams and making a difference in their own lives through the internet and show business.

A big thank you to David Sandberg. And the millions of people who've viewed "True Survivor."

You all have made a difference in my life.

I promise to continue to make a difference in yours.

And thank you to everyone! Thank you so much babe!