Bruce Lorne Campbell is an American film and television actor, director, writer, producer and author. As a cult film actor, Campbell is best known for his role as Ash Williams in Sam Raimi's hit Evil Dead series of films and he has starred in many low-budget cult films such as Crimewave, Maniac Cop, Bubba Ho-Tep, and Sundown: The Vampire in Retreat. He would later spoof his B-movie career in My Name Is Bruce, which he starred and directed. He has since made voice appearances in animated films, including Cloudy with a Chance of Meatballs and Cars 2. Campbell is of Scottish descent. In television, Campbell is known for his lead roles in both The Adventures of Brisco County, Jr. and Jack of all Trades, his portrayal of Autolycus in Hercules: The Legendary Journeys and Xena: Warrior Princess, and notably for his role as Sam Axe on the USA Network series Burn Notice.

• Lee Pace (Lee Grinner Pace is an American actor. Pace has been featured in film, stage and television. He c...) 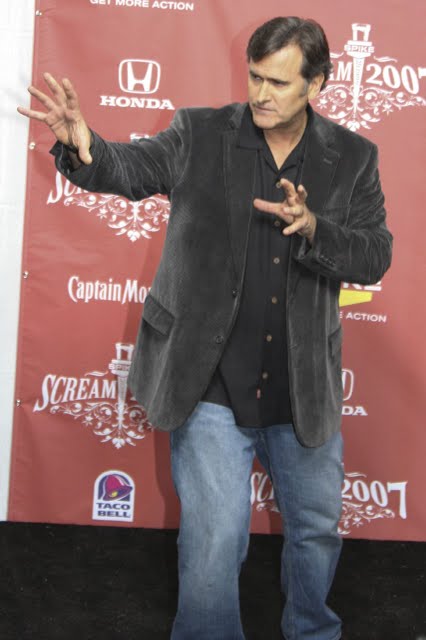 About the Bruce Campbell Interview

You wanted Ash back, now you've got him. Now, be nice cause a little birdy told me you demanded this, so I was kind enough to answer the call of the wild.

Plus, let's be real: I could have been taking a nap right now. But instead I decided to take on your lame, repetitive questions again.

Just please, try and make it original this time.

Edit [2:30pm] One last thing...do me a favor, don't be idiots just order STARZ - don't rip the episode. It'll help us kill deadites for years to come. Catch the next episode on STARZ, Saturdays at 9 PM ET/PT.

Have a good evening, screw heads!