Ethan Green Hawke is an American actor, writer and director. He has been nominated for Academy Awards, both as an actor and a writer, and a Tony Award. Hawke has directed two feature films, three Off-Broadway plays, and a documentary, and wrote the novels The Hottest State and Ash Wednesday. Hawke made his film debut in 1985 with the science fiction feature Explorers, before making a breakthrough appearance in the 1989 drama Dead Poets Society. He then appeared in numerous films before taking a role in the 1994 Generation X drama Reality Bites, for which he received critical praise. In 1995 he starred in the romantic drama Before Sunrise, and later in its sequels Before Sunset and Before Midnight. In 2001, Hawke played a young police officer in Training Day, for which he received Screen Actors Guild and Academy Award nominations in the Best Supporting Actor category. He also garnered two screenwriting Oscar nominations for co-writing the screenplays of Before Sunset and Before Midnight.

• Chris Pratt (Christopher Michael "Chris" Pratt is an American actor. He came to prominence from his television...) 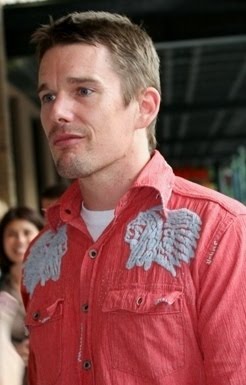 About the Ethan Hawke Interview

Hello everyone. It's been...more than a year since I broke my AMAA virginity. It's exciting to be back again. Victoria's helping me out today. The answers will be mine, but any spelling errors should be attributed to her.

My latest film is PREDESTINATION, the trailer for which you can see here. It's a film I made with the Spierig brothers. They made the film I did, DAYBREAKERS, and in a world where everybody's trying to sell you something, the Spierig brothers are unapologetically out of their minds.

This is my favorite avenue for an interview that I've ever done. It's so enjoyable to talk to everybody, and to hear what people are thinking about, and what interests them. It's like skipping the journalist!

Let me take a brief moment to do a little shameless advertising for PREDESTINATION. Sarah Snook's performance really is worth the price of admission. And if you're interested in real science fiction, you won't be disappointed. It will make you think.

And if not - God bless you. Thank you all.