Andrew Scott is an Irish film, television, and stage actor. He received the 2005 Laurence Olivier Award for Outstanding Achievement in an Affiliate Theatre for the Jerwood Theatre Upstairs production of A Girl in a Car with a Man, and an IFTA award for the film Dead Bodies. Scott's notable television roles have included Paul McCartney in the BBC television drama Lennon Naked and arch-villain Jim Moriarty in Sherlock, for which he was awarded the 2012 British Academy Television Award for Best Supporting Actor, along with the 2013 award for Best Supporting Actor in the television category at the Irish Film and Television Awards. He also won the awards for Best Supporting Actor and Best Actor consecutively in the 2012 and 2013 BBC Audio Drama Awards for his roles in Nick Perry's Referee and Harold Pinter's Betrayal, respectively. Alongside this, Scott was nominated as Best Lead Actor for his role in The Stag at the 2014 Irish Film and Television Awards.

• Keanu Reeves (Keanu Charles Reeves is a Canadian actor, director, and musician. Reeves is known for his roles i...) 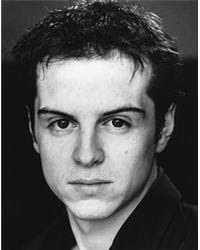 About the Andrew Scott Interview

EDIT: Thanks everybody. Lots of love xx

Hello, at 1.30pm UK time (8.30am EST) Andrew will be answering questions about anything for 1 hour in celebration of his new movie, PRIDE, out in UK cinemas September 12 (Sept 26 in US), starring the likes of Bill Nighy, Dominic West, Imelda Staunton and Paddy Considine!

Pride is based on the true story of the UK gay and lesbian activists work to help miners during their strike of the National Union of Mineworkers in 1984. Watch the trailer here: http://youtu.be/vsFY0wHpR5o