Harrison Ford is an American film actor and producer. He gained worldwide fame for his starring roles as Han Solo in the original Star Wars trilogy and the title character of the Indiana Jones film series. Ford is also known for his roles as Rick Deckard in Blade Runner, John Book in Witness and Jack Ryan in Patriot Games and Clear and Present Danger. His career has spanned six decades and includes roles in several Hollywood blockbusters, including Apocalypse Now, Presumed Innocent, The Fugitive, Air Force One, and What Lies Beneath. At one point, four of the top six box-office hits of all time included one of his roles. Seven of his films have been inducted into the National Film Registry: American Graffiti, The Conversation, Star Wars, Apocalypse Now, The Empire Strikes Back, Raiders of the Lost Ark and Blade Runner. In 1997, Ford was ranked No. 1 in Empire's "The Top 100 Movie Stars of All Time" list. As of July 2008, the US domestic box office grosses of Ford's films total over US$3.5 billion, with worldwide grosses surpassing $6 billion, making Ford the 4th highest grossing U.S. domestic box-office star. Ford is the husband of actress Calista Flockhart. 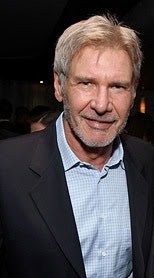 About the Harrison Ford Interview

Harrison Ford here. You all probably know me from movies such as Star Wars and Indiana Jones. I recently acted as a correspondent for Years of Living Dangerously, a new Showtime docuseries about climate change which airs tomorrow, April 13, at 10 p.m. ET. I’ll be here with Victoria from reddit for the next hour answering your questions.

Well, watch Years of Living Dangerously and make it your business to understand the threat of climate change and what each of us can do to help preserve our environments and the potential for nature to preserve the human community. Nature doesn't need people, people need nature. Thanks for this. I enjoyed it.