Yao Ming is a retired Chinese professional basketball player who played for the Houston Rockets of the National Basketball Association. At the time of his final season, he was the tallest active player in the NBA, at 2.29 m. As of 2014, he is the 31st tallest person alive. Yao, who was born in Shanghai, China, started playing for the Shanghai Sharks as a teenager, and played on their senior team for five years in the Chinese Basketball Association, winning a championship in his final year. After negotiating with the CBA and the Sharks to secure his release, Yao was selected by the Houston Rockets as the first overall pick in the 2002 NBA draft. Yao was selected to start for the Western Conference in the NBA All-Star Game eight times, and was named to the All-NBA Team five times. He reached the NBA Playoffs four times, and the Rockets won a first-round series in the 2009 postseason, their first playoff series victory since 1997. In July 2011, Yao announced his retirement from professional basketball due to a series of foot and ankle injuries which forced him to miss 250 games in his last six seasons. 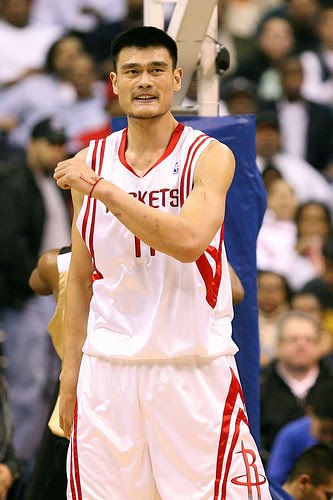 About the Yao Ming Interview

In the show I travel to Africa to see firsthand the consequences of poaching and work with advocates there to help save wildlife.

Victoria is assisting me in-person today along with a translator. AMA!

Update: Well, I would like to thank everyone to spend time with me. And thanks for the questions, I had a lot of questions, a lot were quite interesting. And I hope everyone can pay attention on the show on Animal Planet for the film we brought back from Africa, 10 pm next Tuesday east coast time!

And spread the message of IvoryFree.org for us. Thank you!