Anthony "Tony" Robbins is an American life coach and self-help author. He became well known through his infomercials and self-help books, Unlimited Power, Unleash the Power Within and Awaken the Giant Within. In 2007, he was named in Forbes magazine's "Celebrity 100" list. Forbes estimated that Robbins earned approximately $30 million USD in that year. 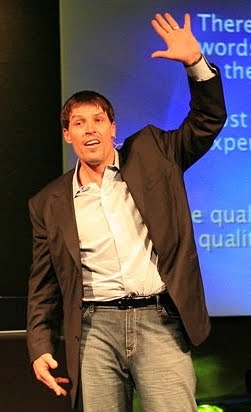 About the Tony Robbins Interview

Hey redditors, it's Tony Robbins here. I am a bestselling author, entrepreneur, and philanthropist. For the last 37 years, I've reached millions of people all over the world at my business and personal development events and through my audio and video products. It's been a privilege to be called upon to consult and coach with some of the world’s finest athletes, entertainers, Fortune 500 CEOs, and even presidents of nations. Mostly I'm proud to feed 4 million people per year in 56 countries and coordinate programs in more than 1,500 schools, 700 prisons, and 50,000 service organizations and shelters — this year I’m donating all the profits of this book in advance plus an additional financial gift to personally feed 50 million. I’m also working with my partners at Feeding America (America’s largest hunger relief organization) to obtain matching funds so that we can provide 100 million meals this year.

My first book in 20 years is out this week. Money: Master The Game is the result of interviewing 50 of the world’s most brilliant financial minds (from Carl Icahn to Jack Bogle to Ray Dalio to Paul Tudor Jones) to uncover the 7 Simple Steps that put you in full control of your financial future.

Victoria is helping me get started. I'm looking forward to taking your questions today - AMA!

UPDATE Thank you everyone for all your questions - I tried to get to as many as I could. I hope our paths will cross sometime soon.

I invite you to pick up this book - I promise it will be an invaluable investment, and once again, all the profits are going to feed those families in need in this country. And i appreciate you supporting yourself, and I appreciate you also helping those that so many have forgotten about.

I feel blessed to have spent time with you. Live with passion!