Cyndi Lauper is a co-founder of True Colors Fund.

• Andrew MacKay (Andrew James MacKay is a British Conservative Party politician, and was the Member of Parliament ...)

• Anthony Bourdain (Anthony Michael Bourdain is an American chef, author, and television personality. He is a 1978 gr...) 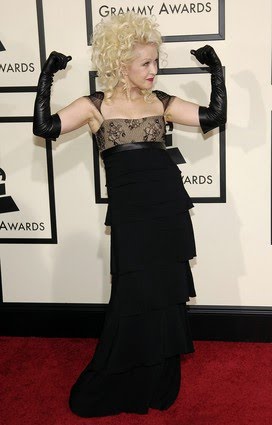 About the Cyndi Lauper Interview

Hi guys. This was supposed to be the 30th Anniversary, but I'm always a little late, so this is kind of the 31st or 32nd Anniversary, but I wanted to make sure that you had not only interesting tid-bits on the album, like demos and conversation, but I finally got to do a special on PBS that'll be released hopefully around Christmas so that people can finally get the whole album. I neva did the visual of a whole album, and I tried to find the first one, on the Fun Tour from '84, but all of it was disintegrated in their vaults, because, they basically, I guess they didn't think it was important to save correctly! I shoulda bought it from them, that's all, but they wouldn't sell in those days...

ANYWAYS, I'm celebrating 30 years of ‘She’s So Unusual' and we're re-issuing it on vinyl,.

My 4th annual "Home for the Holidays" benefit concert is happening on 12/6 at the Beacon theatre in New York.

I'm also the composer of the music for Kinky Boots on Broadway and on tour. http://kinkybootsthemusical.com

I'm here with Victoria from reddit helping me out. Whaddya wanna know?

Edit: Well, thank you all for joining this chat. I'm very flattered that anybody showed up, thank you very much! And I guess the album was a kind of a trying to give back to the people that the album meant a lot to. I tried my best to put stuff on there that would make you smile, and understand the process a little bit, that it's not always just the guy in the front, it's the team you're with and that was my team.