Christopher Keith "Chris" Irvine, better known by the ring name Chris Jericho, is a Canadian-American professional wrestler, musician, media personality, actor, author, and businessman. Currently signed to WWE, he is also well known for his time in Extreme Championship Wrestling and World Championship Wrestling, and internationally in Canadian, German, Japanese, and Mexican promotions. He is known for his over-the-top, rock star persona – dubbed "The Ayatollah of Rock 'n' Rolla" – and for a contrasting run as an aloof villain in the late 2000s and early 2010s. Jericho has won 30 championships between WWE, WCW, and ECW – the three most prominent American promotions in the 1990s and early 2000s. He is credited as being the first Undisputed WWF Champion, having unified the World Championship and the WWF Championship by defeating The Rock and Stone Cold Steve Austin on the same night in 2001. He is also the fourth WWE Grand Slam Champion and is currently the only Grand Slam Champion to have held every title in WWE. Jericho has been a challenger to major world championships since the mid-1990s. 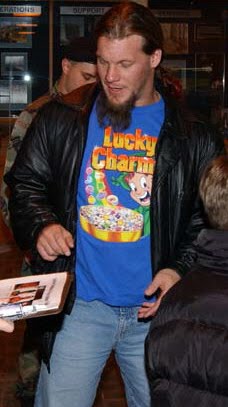 About the Chris Jericho Interview

My new book is called The Best in the World.

Let's rock! Here at reddit HQ in New York... Ask away...I'll answer anything ya want as long as it's a question I feel like answering :]

Thanks you guys! All Jerichoholics are the GREATEST!!! Check out my new book "The Best In The World -At What I NO Idea" in stores now for more fun Y2J/Fozzy tales and we will see u SOON!!