Gillian Leigh Anderson is an American actress. After beginning her career in theatre, Anderson achieved international recognition for her role as Special Agent Dana Scully on the American television series The X-Files. Her film work includes The House of Mirth, The Mighty Celt, The Last King of Scotland, and two X-Files films, The X-Files and The X-Files: I Want to Believe. In 2013, Anderson was cast as Hannibal Lecter's psychotherapist, Bedelia Du Maurier, on the television series Hannibal and in 2014, she began starring in Crisis, which was cancelled halfway through its first season on May 9, 2014, with the final episode airing June 21. Anderson has received five Primetime Emmy Awards nominations winning one and five Golden Globe Awards nominations with one win.

• Anna Chlumsky (Anna Chlumsky is an American film, stage and television actress who rose to prominence for her ro...) 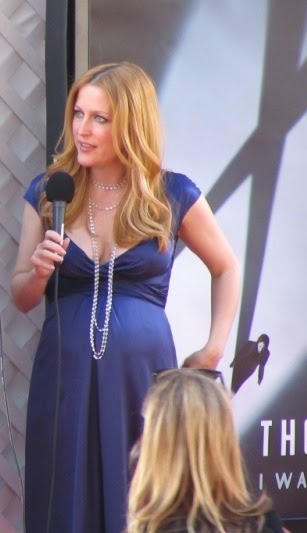 About the Gillian Anderson Interview

Hi guys. We're in New York for the 20th anniversary X-files Panel at the Paley Center this evening and NYCC the rest of the day and Victoria from reddit is helping us out. Come hang with us for the next two hours during our Ask Us (almost) Anything reddit!

update: thank you so much for coming by to ask us questions. We know it's early. See you next time. We're going to take a proof photo since so many of you have asked for it.