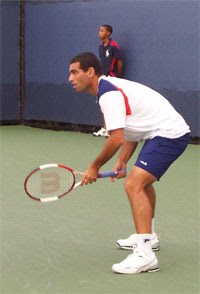 Andy Ram (Tennis player): Andy Ram is an Israeli professional tennis player. He is primarily a doubles player. He is the first Israeli tennis player to win a seniors Grand Slam event. He first won the mixed doubles title at the 2006 Wimbledon Championships, together with Vera Zvonareva. He then won the mixed doubles title at the 2007 French Open with Nathalie Dechy, and the men's doubles title at the 2008 Australian Open with Jonathan Erlich. Ram attained his highest doubles ranking of World No. 5 in July 2008. He reached 36 doubles finals and won 20 of them through 2013, mostly with partner Jonathan Erlich; together, they are known in Israel as "AndiYoni". His Davis Cup doubles record, as of 2013, was 17-7. In May 2014, he announced his retirement, to take effect after Israel's Davis Cup tie in September.