Miguel Chaves (Olympic athlete): Miguel Chaves Sánchez is a former field hockey player from Spain, who won the silver medal with the Men's National Team at the 1980 Summer Olympics in Moscow. 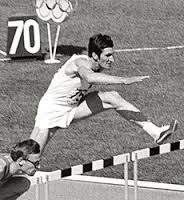 Daniel Riedo (Olympic athlete): Daniel Riedo is a retired Swiss sprinter. He competed at the 1968 Olympics in the 110 m hurdles but was eliminated in a semifinal.