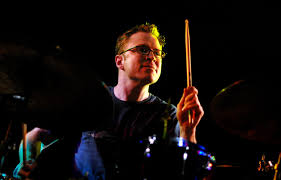 Stanton Moore (Drummer): Stanton Moore is a funk, jazz and rock drummer reared in Metairie in Jefferson Parish in suburban New Orleans, Louisiana. Most widely known as a founding member of Galactic, Moore has also pursued a solo recording career and recorded with bands as diverse as jazz-funk keyboardist Robert Walter and heavy metal act Corrosion of Conformity.
Vinnie Fiorello (Drummer): Vinnie Fiorello is an American drummer, lyricist and a founding member of the ska punk band Less Than Jake. As a child, Fiorello's family owned a dog named Jake who was "treated like a king" according to the band's website FAQ page. As a result, everything in the house became "Less Than Jake", spawning the band's name. Fiorello is known to be a collector of Pez dispensers, as is his Less Than Jake bandmate Roger Manganelli. Fiorello grew up in New Jersey but moved to Gainesville, Florida at the age of 16. As a result, almost every Less Than Jake album has a reference to New Jersey. Though his drumming style does not reflect it, Fiorello was influenced by Dave Lombardo of Slayer. It was his idea to record two Slayer cover versions and to release a 7". These two songs are found on the rarities collection Goodbye Blue and White. As the lyricist, Fiorello is generally ...