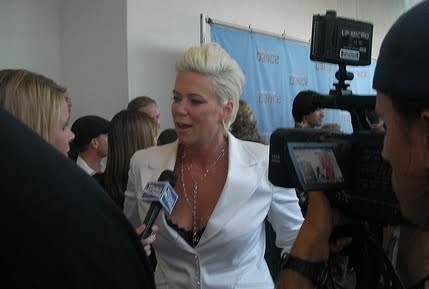 Mia Michaels (Choreographer): Mia Michaels is an American choreographer best known for her judging and contemporary choreography on the TV show So You Think You Can Dance. She has worked with musical artists such as Celine Dion, Madonna, Tom Cruise, Catherine Zeta-Jones, Ricky Martin, Gloria Estefan, and Prince. In 2005 she choreographed Cirque du Soleil's world tour, "Delirium" as well as Celine Dion's Las Vegas show "A New Day..." for which she was later nominated for Emmy. In 2007 she won an Emmy Award for Outstanding Choreography for her "Calling You" routine on season 2 of So You Think You Can Dance; she won again in 2010 for her work on season 5. She was a main judge of So You Think You Can Dance together with Adam Shankman and Nigel Lythgoe for season 7. She choreographed the dance sequence of "Get Happy" in Season 7 Episode 15 of the "House" episode "Bombshells".